The breakout TV series is the stuff of travel fantasy, but you don’t have to be a fictional character to have a dream trip to France.
The good life, Parisian-style, eye-catching fashion center-stage and a thread of romance against a backdrop of one stunning City of Lights setting after another, Emily in Paris on Netflix follows the French adventures of a young American woman living the dream when her luxury marketing job is relocated to Paris.
The pure escapism of the streaming series, as well as the heroic secondary character – Paris itself! – has captivated and inspired audiences.
If Emily in Paris has made you imagine yourself in Paris, read on!  Here are just a few locations in the City of Love where Emily’s adventures took place – and your own adventures in France, can too!
Jardin du Palais-Royal
Emily first meets her friend Mindy, a nanny living in Paris, in the elegantly landscaped gardens just steps from the Louvre in the heart of Paris.
The Jardin surrounds the 17th century Palais-Royal – once, as the name suggests, a palace, but now, government buildings.  It’s a little green haven in this busy part of the city, where locals take five to recharge, and visitors can rest their feet and regroup surrounded by classically French gardens.
Café de Flore
In the late 1800’s and first part of the 20th century, Saint-Germain-des-Prés was perhaps the most artistic neighborhood in the world, drawing giants and change-makers who transformed their fields and defined an era. Artists, novelists, and philosophers turned Saint-Germain-des-Prés into an incubator for some of the most profound works from the period that we still know and love today.
And many met, exchanged ideas and inspired each other at the picturesque sidewalk tables of the Café de Flore, one of the oldest in the city.  It’s still a must-see destination in Paris today, fantastic for people-watching. Of course, producers of Emily in Paris had to include this iconic and easily-identifiable setting for the scene where our heroine meets Thomas, a professor.
Opéra National de Paris - Palais Garnier
Emily in Paris is not the first work of fiction to be set in this famous Paris location. Perhaps you’ve heard of The Phantom of the Opera?
The setting that inspired one of the most successful musicals of all time, Paris’ magnificent opera house dates from the 19th century. As impressive as the architectural masterpiece is on the outside, it’s truly breathtaking on the inside, so like Emily visited to see Swan Lake, we recommend you book tickets for one of the operas, orchestral, or ballet performances scheduled.
For her visit to the Palais Garnier, Emily even dresses in a nod to Audrey Hepburn, perhaps the Hollywood actress most associated with her string of classic films set in the City of Light, and as the muse of iconic couturier Hubert de Givenchy. 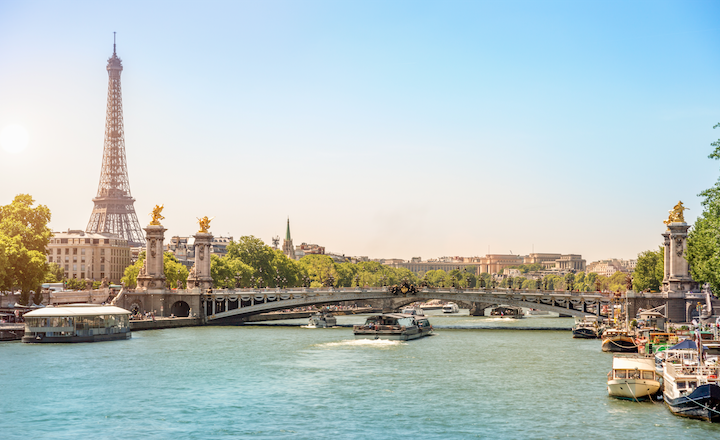 Pont Alexandre III
Gardens, cafés, architectural marvels… and bridges. Any story located in the city built up from the Seine must include at least one of its famous bridges, and Emily in Paris is no exception.
Emily’s marketing company uses the Alexandre III bridge as the set for a commercial shoot for a client’s perfume, and the shoot-within-a-shoot location couldn’t be more ideal.
While the ironically-named “Pont Neuf” (New Bridge) is the oldest structure spanning the Seine, Pont Alexandre III may have the distinction of being the most beautiful.  Not only is it stunning to behold, but a walk across it reveals iconic scenes of the city, including the Eiffel Tower. 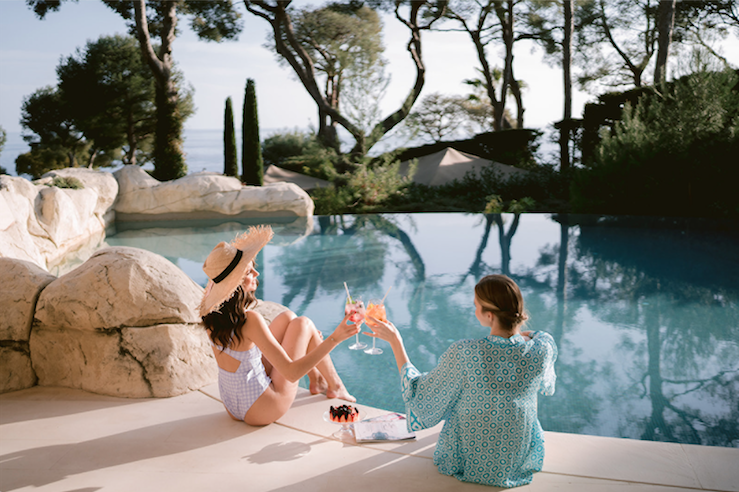 EMILY BEYOND PARIS
Like many savvy visitors to France, Emily travels beyond the City of Light’s famous Boulevard Périphérique ring-road, to savor the best of French beach life on the famous Cote d’Azur.
In the series, Emily takes a girls’ getaway to the real-life, iconic Grand-Hôtel du Cap-Ferrat, an institution on the glamorous French Riviera since the Art Deco era of the 1930’s. On acres of grounds punctuated with local, Mediterranean trees and vegetation with the sea lapping at its secluded pebble beach, this Four Seasons Hotel is the perfect setting for a fictional – or a real life! – escape to the indulgence of one of the world’s most famous seaside lifestyles.
In fact, the hotel has even created an experience, inspired by its starring role in Emily in Paris, for any guest.  Its “Girls’ Trip on the French Riviera” experience echoes Emily’s fictional trip: transfers from the airport in a Bentley; a stay in a Sea-View suite with elegant French windows opening up onto a patio with an infinity pool or, on higher floors, with views high over the sea; bespoke cocktails; Mediterranean-based spa treatments; and a private cabana at the hotel’s famous pool-side Club Dauphin where the hotel also arranges for a photo shoot to memorialize your own, Emily in Paris-inspired dream vacation.

By: Lynn Elmhirst producer/ host BestTrip TV
All rights reserved. You are welcome to share this material from this page, but it may not be published, broadcast, rewritten or redistributed.
Top Image: courtesy of Netflix
Middle Image: Getty
Bottom Image: courtesy of Grand-Hôtel du Cap-Ferrat, a Four Seasons Hotel