Pretty in Pink: Where to Meet the National Bird of the Bahamas

The Caribbean flamingo is an iconic symbol of the tropics, with its vivid pink plumage standing out against a backdrop of turquoise waters, green palm leaves, and pastel-colored buildings. In the Bahamas, where it’s the national bird, flamingos have made a strong comeback thanks to conservation projects. The Islands of The Bahamas may be one of the best places in the world to get up close to this iconic, almost cartoon-like wading bird.
Fun facts: the same carotenoids that make carrots orange and ripe tomatoes red also make flamingos pink. They are also found in the microscopic algae that brine shrimp eat (which is why shrimp turn pink when you cook them) and as flamingos eat the algae and brine shrimp, they also turn flamingos’ feathers pink!
No wonder a group of flamingos is called a ‘flamboyance!’
Here are three of the best places in The Bahamas to see a flamboyance of flamingos in all their glory:

Ardastra Gardens in Nassau (pictured, top) is the only wildlife conservation center in The Bahamas. Don’t miss the Flamingo Show which happens three times a day, when the adorable stick-legged birds march into a white-picket-fence enclosure for some up-close viewing.
So vivid and oddly shaped, it’s tempting to think of flamingos as coming from the imagination of someone like Dr. Seuss – but they are a quirky wonder of nature, and during the Flamingo Show, these majestic birds will walk right up to you with their beaks held high in an orderly procession. Don’t miss out on this stately avian parade!

Maybe you’ve heard of puppy yoga or even goat yoga. The Bahamas takes stretching to the next level with Flamingo Yoga! Practice your poses with the flexible-necked birds at the Baha Mar luxury resort complex. 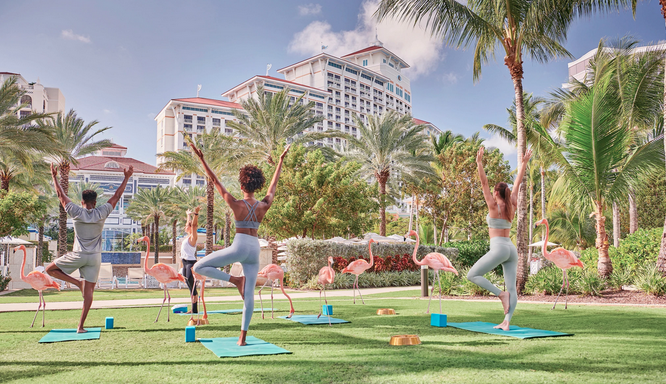 Image Courtesy of Baha Mar
The flamingos here are known to be friendly, and at times, goofy as they try to mimic your yoga poses right next to your yoga mat! The Flamingo Yoga sessions take place on Saturday mornings and can be booked through the Baha Mar spa.

Flamingo Cay is a habitat that helps preserve the flamingo population. You can walk alongside the flamingos every morning as they make their leisurely way down to the white sand beach or ask about a more intimate experience at the Flamingo Encounter.

Inagua National Park was established in the 1960’s by The Bahamas National Trust as a conservation project for flamingos. The 220,000 acre-park is home to the world’s largest breeding colony of West Indian (Caribbean) flamingos. 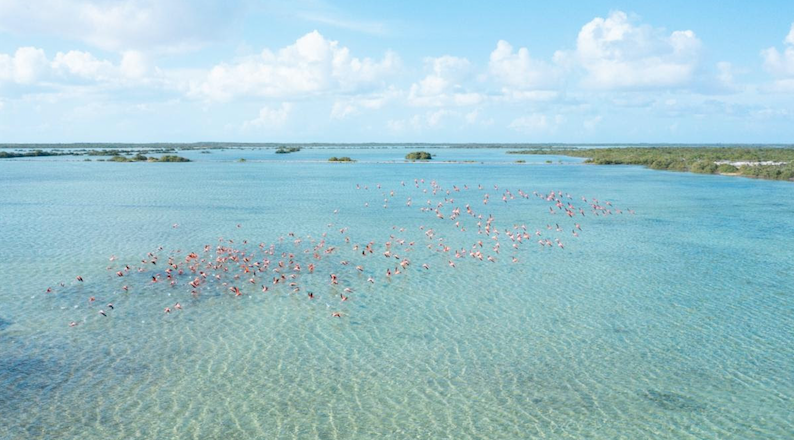 Flamingos in Inagua - Image Courtesy of The Bahamas Ministry of Tourism, Investments & Aviation
Since the early 1900’s, there had been growing concern about the Caribbean flamingo population, and the establishment of Inagua park National Park helped flamingos make a comeback from the brink of extinction to a colony of over 50,000 birds today. The park is even helping increase flamingo numbers beyond The Bahamas and is now a designated and protected wetland – as well as a birdwatcher’s paradise for its tremendous flamboyance of flamingos.

Your trip starts with us! Contact one of our travel experts today and make a dream come true in the Bahamas…

Image credits as noted. Top image: Ardastra Gardens & Wildlife Conservation Centre
All rights reserved. You are welcome to share this material from this page, but it may not be copied, re-published, broadcast, rewritten or redistributed.