The Whale Shark Whisperer of Cabo

It’s a paradise where Mexico’s Sea of Cortez meets the Pacific. Los Cabos has become synonymous with a chic coastal retreat for Hollywood celebrities and global jetsetters.
The southern tip of the Baja Peninsula teems with luxury beachside resorts and spas, where stylish people relax, go golfing, horseback riding, and dancing til dawn.
But Cabo is first and foremost about the sea. Its signature landmark is the Arch rock formation rising from the ocean at the ‘End of the World’, and water-based activities like kayaking and paddle boarding, snorkeling and diving dominate the holiday lifestyle. 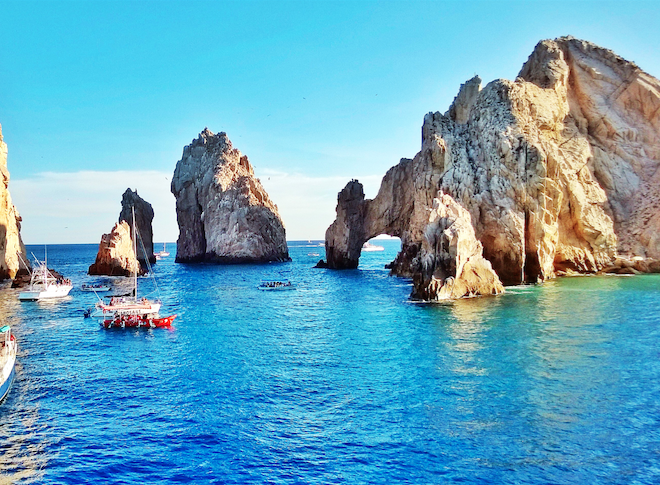 Cabo is the launching pad for visits to the area of Cabo Pulmo, Mexico’s protected National Marine Park known as “The Aquarium of the World”, and its most famous resident, enormous whale sharks.
They’re called ‘sharks’, but these ‘Gentle Giants’ are slow-moving filter feeders completely harmless to humans. Whale sharks are the largest fish in the seas, growing to more than 30 feet and 20,000 pounds, making them far and away the largest non-mammal creature alive.
Any glimpse of a whale shark in the wild is magnificent. But in Cabo, visitors can join tours that allow you to swim among these breathtaking creatures. Cabo’s whale shark viewing season runs October through April, and it’s an experience you’ll never forget.
We asked Los Cabos diver and expert whale shark tour guide Oliver Hernandez what it’s like to swim with these gentle giants.
How long have you been swimming with the whale sharks?
“My first season swimming with the sharks was in 2013. I had been working as a guide for a number of tours since I moved to Los Cabos in 2008. I’ve loved the water since childhood, so that type of tour was a natural fit for me. When I learned that there were whale shark tours operating out here, I knew I had to apply to become a tour guide.”
You have a job that a lot of people likely envy. What amazes you most about what you do?
“I feel extremely lucky to be able to swim with these incredible animals. It’s truly a mind-blowing experience. The very first sighting of a whale shark in our waters was only in 2006, and many people had no idea that a swimming excursion with them was even an option. In my first season, we only had tours every third day with maybe eight guests.  Of course, it exploded in popularity rapidly and we quickly had to develop a system to avoid disturbing the sharks. Today, you may be on a waitlist for a tour because we cap it at 14 boats in the water at a time to ensure the sharks remain comfortable. I’m proud of how we moved quickly to accommodate the sudden increase in demand while still remaining respectful of the needs of the wildlife.”
How has the marine tour industry and its protocols evolved?
I’ve personally witnessed many changes in my time here, and all of them have been for the better. There have been different rules and restrictions in place over the years and all of them have been guided by the desire to provide the best experience possible for the guests and the animals. I feel confident and proud in saying that Los Cabos takes the utmost caution to tour the waters respectfully and cultivate a love for the sharks. I feel that, since our inception, we have demonstrated respect and care for this species and that is an amazing thing.”
You work with whale sharks almost every single day. What’s the most important or interesting thing you’ve learned about them?
“The most important thing for me, when dealing with any species in the ocean, is care and perseverance. It is important to respect the ocean’s wildlife, and I think that doing so has helped to maintain that sense of wonder I get every time I dive in. Unlike in say a zoo, these animals are not here for us to look at: we are entering their home and humbly requesting an audience with them. We should always feel grateful for the opportunity to interact with these creatures in their habitat.” 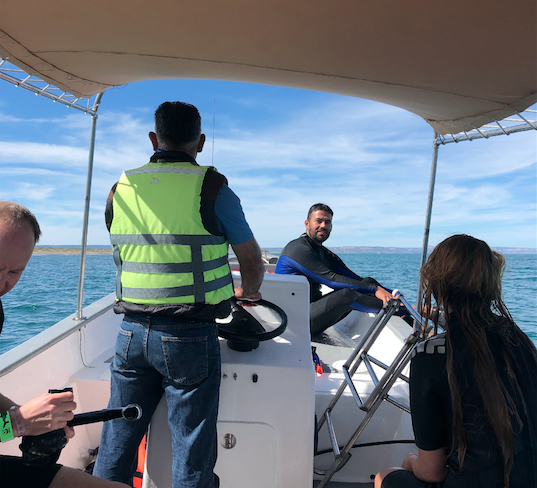 What’s the secret for consistently finding these breathtaking animals and introducing them to the guests?
“It’s all about teamwork. The captain, Jorge, seems to instinctively know exactly where to position the boat. As guides, we are in the water simultaneously watching the position of every guest and every shark. On days where it’s proving difficult to spot them, we manage to approximate their location by reading the flow of the waves and the ‘trail’ they leave in the water as they swim. As the captain spots from the boat, he relays what he sees to the guides and gets us moving in the right direction. “
Although whale sharks are docile filter feeders, there are definitely people out there who will have reservations about swimming with any kind of shark. What would you tell a guest who might be feeling a bit hesitant to get in the water with them?
“The good news is that unless you are plankton, you aren’t on the menu. Whale sharks are gentle and will show respect, as long as their space is respected. We encourage guests not to impede their movements and to stay out of their way so they feel relaxed. When in the water with any species, the key is always to blend in. Once you jump into the water or start splashing around wildly, the whale sharks can feel the vibrations and motions of the water and they are bound to take off rather than approach. The key to having a good experience with the animals is just to be calm and don’t interfere with wildlife. Whether it’s whale sharks, dolphins, or hammerheads, they will respond by remaining calm as well.”
What are some of your most memorable moments while leading a tour?
“We had a guest once who was swimming and was grazed by a whale shark. Whale shark skin feels like sandpaper, so she had a big shock. At times, when there are many whale sharks in the water, you have to become a matador. One time I was following along with the group and I felt a presence next to me, so I turned around and found myself staring into the huge open mouth of a whale shark coming towards me. I had to roll myself like a tortilla and I was just floating along the surface while the whale shark passed, the fin gliding right between my legs. It can happen more than once because the whale sharks are everywhere. That’s what makes the experience so fun.”
Top, middle photos: Getty
Bottom photo: Visit Los Cabos
Copyright BestTrip.TV/Influence Entertainment Group Inc or Rights Holder. All rights reserved. You are welcome to share this material from this page, but it may not be published, broadcast, rewritten or redistributed.