This Old Ship is the Caribbean's Great New Dive Destination 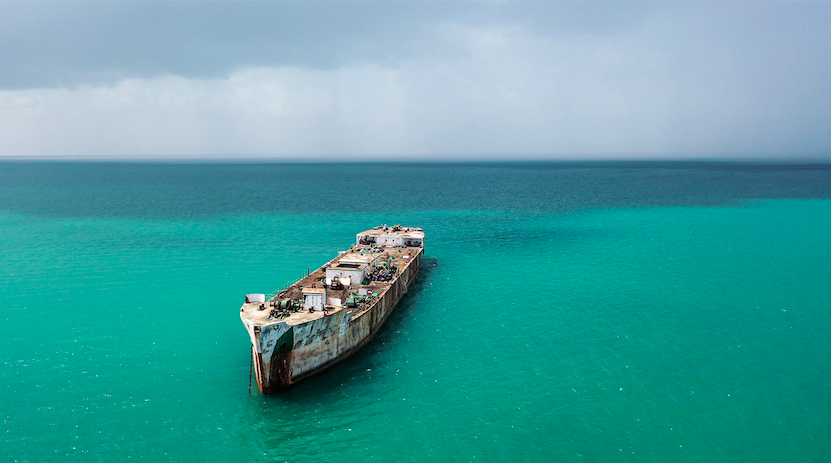 Sunken wrecks aren’t just fascinating destinations for underwater exploration or fantasies of pirate ‘days of yore’. Properly and carefully submerged, wrecks enhance natural reef ecosystems and provide new homes for marine plants and creatures.
A new submerged ship is about to become a prime diving attraction in the 2nd-largest barrier reef in the world. It will also contribute to sustainability in a number of ways.
The Wit Concrete ship is a 375-foot long, 58-foot wide, and 38-foot deep ship originally built during WW2, one of the largest concrete ships built during wartime. Over its hard-working life, the ship had different tasks, beginning as a floating transfer station for supplies along the U.S. Gulf Coast and Eastern Seaboard during the war, up to its most recent ‘life’ as a storage vessel for molasses by Belize Sugar Industries.
Upon retiring the ship, the company donated it to the Turneffe Atoll Sustainability Association to submerge.
The Turneffe Atoll is part of the Mesoamerican Barrier Reef System. Sometimes called the Great Maya Reef, this UNESCO World Heritage site stretches 700 miles from the Yucatan Peninsula of Mexico, south along the Caribbean coasts of Belize, Guatamala and Honduras.
Nearly a third of the system lies along Belize’s coastline.
That includes the Turneffe Atoll, a 30-mile long chain of ‘cayes’ (mini-islands, pronounced ‘keys’) that covers over 300,000 acres just 20 miles off the coast of Belize City. Belize declared the atoll a national marine reserve in 2012.
Over 500 species of fish, 65 types of corals, sea turtles, manatees, dolphins, marine birds and other wildlife call the chain of cayes and their waters, mangroves and seagrass shallows home. Surrounded by deep ocean, the Turneffe Atoll is considered the largest, and most biologically diverse coral atoll in the country and the entire Mesoamerican Reef marine ecoregion.
The Turneffe Atoll is already a prime destination for sustainable ocean tourism, including ecotours, snorkeling, diving and salt-water sport fishing. For those in the know, it’s one of the best places for a sport-fishing ‘Grand Slam’ – that is: catching a bonefish, permit and tarpon all on the same day at sea.
Sustainable dive tourism to the Turneffe Atoll is getting a big boost, too, with the submerging of The Wit.
Turneffe Atoll Sustainability Association (TASA) is in charge of day-to-day operations of the reserve. TASA worked with Artificial Reefs International, an organization with expertise in the planned submersion of ships. Local marine experts cleaned and prepped The Wit to create, add or widen access points for divers and sealife to enter and exit the ship, and remove any hazardous materials, meeting US Environmental Protection Agency standards that avoid any negative impact of the ship on its new home on the ocean floor.
All that was done in preparation for The Wit to be towed to the Turneffe Atoll and carefully sunk in a designated place, to begin a new and final life on the ocean floor in the Turneffe Atoll Marine Reserve.
The benefits are three-fold. First, “The Wit Turneffe” is a new dive destination for Belize and the entire region. It puts Belize on the map as the home of one of the largest wreck dive attractions in the Caribbean.
In fact, The Wit Concrete’s sister ship – TheWitConcrete II – was sunk in the U.S. Virgin Islands in the ‘90’s, where it has become of that destination’s premier dive sites and top marine attraction.
“Wreck diving is an increasingly popular activity that draws a select population of environmentally-conscious divers from across the world,” says Valdemar Andrade, Executive Director of TASA.
Attracting divers provides new income for the marine reserve and local stakeholders that host dive tourists. Funds collected from wreck diving through the park entrance fee system will assist in funding TASA’s operations and other sustainability programs in the Turneffe Atoll Marine Reserve.
And thirdly, The Wit Turneffe wreck enhances the reef’s ecosystem and contributes to increasing marine biodiversity.
“Over the years, marine flora and fauna will use The Wit’s walls, rooms and cabins, filling them with a different history, as the wreck gradually blends into the existing reef system,” Andrade explains.
Over the long term, TASA plans to develop an impactful and exclusive experience where divers can directly participate in scientific monitoring, protection of the area and other exciting, hands-on environmental programs in the Turneffe Atoll Marine Reserve.
Divers who visit annually will see not just a fascinating wreck, but also a growing ecosystem inside and surrounding an old ship with a new, underwater purpose.
Contact one of our Travel Professionals today to start planning your once-in-a-lifetime dive experience!

Image courtesy of the Belize Tourism Board